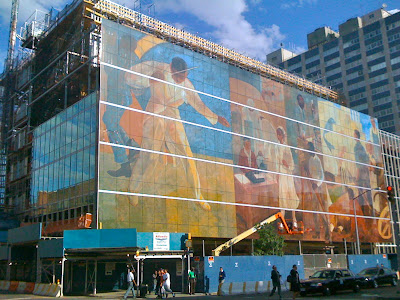 When we started covering the new Harlem Hospital wing back in February, the artwork that would wrap around the front facade was still a bit of a mystery. As of this week, those said images are now up on the newly glassed building of the Harlem Hospital Center. The previous article that was referenced explained that "(the architects) masterstroke was to photograph, and then display via huge blown-up projections across the façade of the building, a series of murals created for the hospital in the 1940s through the Works Progress Administration’s Federal Art Project."
Apparently, the projections are not of the light show kind but actual images of the WPA works on transparent scrims that drape each window panel of the 80-foot-high structure. This corner of Lenox and 136th Street was looking a bit drab as of late and the new visuals on the block are turning out quite nicely (if we do say so ourselves). See the original design sketch and the start of the project in our past post: LINK. Read more about the architecture on the AIANY site: LINK. Click on image to enlarge. Photo by Ulysses
Posted by Ulysses at 11:47 AM