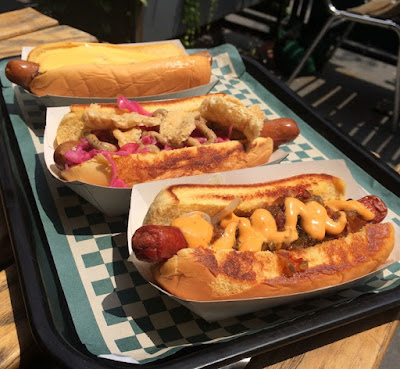 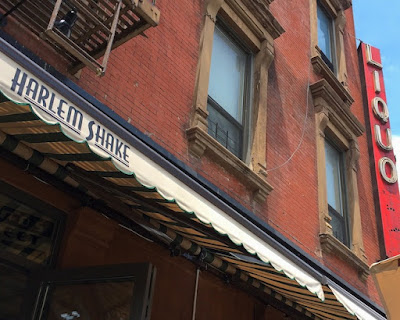 Nothing says summer like a good hotdog and Harlem Shake over on Lenox and 124th Street was the first uptown to have several variations of the American classic.  In celebration of the warm weather, we hung out at the outdoor cafe this past week and revisited some of the offerings on the menu.  As can be seen in the photos, the three dogs came out on perfectly toasted buns which were a step up from most places and each had their own story.

The chilly cheese dog is a classic and the Harlem Shake version had a more gooey, processed type of cheese melted on top which actually hit the spot.  Next up was the Jerk Dog which promised a bit of spice and Jamaican flavor.  We found that most of the seasoning was in the mayo which made for somewhat of a mixed result but purple slaw and pork rinds sprinkled on top made things a little more exciting.  Our final dog of the day was called the Sonoran dog which was wrapped in crispy bacon and topped of with pickled cherry peppers, relish, chipotle mayo, onions accented with some of that aforementioned cheese.  This has always been our favorite on the menu and is still a standout today.

For those further uptown, the dog trend has also arrived in Hamilton Heights on the Broadway corridor. At the Wallace has a full menu of grilled cheese and hot dog options for those who want more unexpected variations of the trend which includes a breakfast option complete with a fried egg: LINK
Posted by Ulysses at 2:48 PM