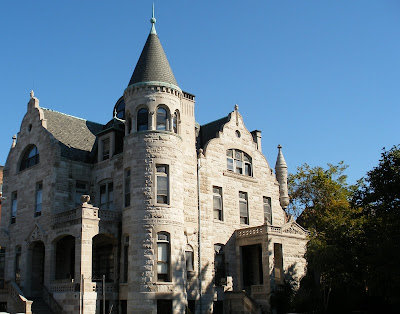 James A. Bailey, the legendary partner of P.T. Barnum, built this Romanesque Revival house in Hamilton Heights when mansion estates were popular within Northern Manhattan. Most free standing mansion of this scale in New York City have been demolished to make way for multi-level flats during the development frenzy of the early 20th century. This property has a complete, historically intact exterior and interior that has not been altered from its original plan. Since the 1950's, it has been a funeral home but has recently been placed on the market for $10 million in late 2008. There has been a suggestion that the government should buy the property and change it into a museum which, by the way, does not sound like such a bad idea.
The house is on the corner of 150th street and St. Nicholas Place.
Posted by Ulysses at 12:44 AM