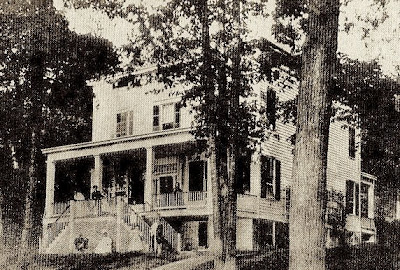 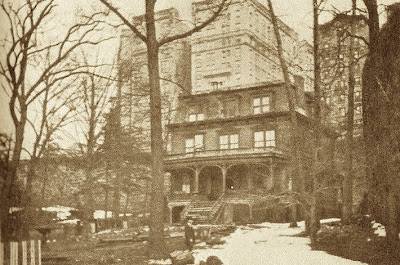 John James Audubon's beloved estate (named after his wife) was a city treasure that mysteriously disappeared in the 1940's. Originally a sylvan-like estate in what would be the West 150's, the naturalist was already famous when Audubon decided to settle down in northern Manhattan in 1839. The top print is from the 1856 Valentine's Manual of New York, showing the estate as it was five years after Audubon's death. The area was known as Carmansville at that time, and family would remain in the house until 1920. The second photo, shot also in the 1850's, is a rare, early type of photo called a Calotype that uses photo paper instead of glass or film. Although the detail is not clear, one gets a sense of the natural, woodsy surroundings. The last photo is from 1917, and one can see the wall encasing the estate in the back with the new Riverside luxury apartments in the background (which have just been landmarked as part of the district).

By 1931, the house was slated for demolition, even though it was known to be a valuable landmark to preserve. A mysterious benefactor helped a writer of New York Times buy the house the day that the roof was being dismantled, but what happened next is a bit unclear. Historians have indicated that the plans to move the house to 161st and Riverside were executed, but photos do not exist that could confirm this action. Apparently, after the house was moved, the wood became rotted beyond repair, so presumably Depression-era New York City did not have the funds or foresight to prevent John James Audubon's family legacy to return to nature. Photos courtesy of minniesland.com. Take the 1 train to 158th Street to see the Audubon Park District at Riverside Drive. More photos on the minniesland.com site: LINK
Posted by Ulysses at 10:06 AM

Email ThisBlogThis!Share to TwitterShare to FacebookShare to Pinterest
Labels: Remember