☞ WALK: Where is Hedda Gobbler? 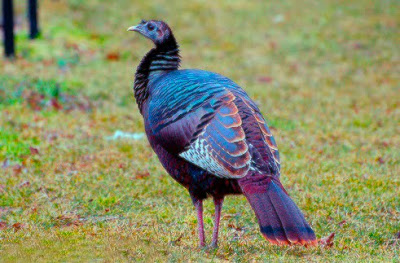 Looking around all the bird watcher blogs, we realized that Harlem's own hometown turkey, Hedda Gobbler hasn't been photographed in about a year. The wild female turkey was found roaming around a central Harlem housing projects in 2006 and was released into Morningside Park later that year. We have been trying to look out for her since spring but have not had any luck. Has anyone seen Hedda as of late? There is apparently another male turkey somewhere in the area also (males have the red colored throats) but that one has not been photographed as much. It's Thanksgiving time so maybe the turkeys are laying low. To get to Morningside Park, take the 1 or B,C train and walk towards Morningside Avenue. Photo taken a couple of years ago by bloomingdalevillage.blogspot.com
Posted by Ulysses at 10:10 AM