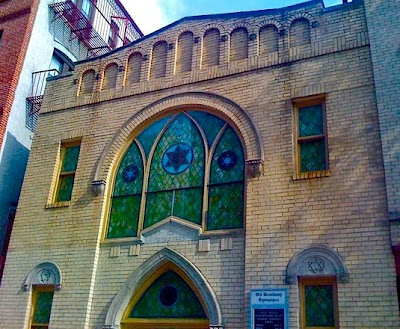 We always marveled at the beauty of the Old Broadway Synagogue and its stained glass window on the eastward section of Manhattanville. Although modest, the temple is probably one of the last continuously running synagogues from Harlem's former Jewish population. On their blog, there is a photo of what the building windows look like from 1960 until 2003-which was basically cinder blocks and metal screens. In 2003 a generous grant from the New York Landmarks Conservancy and the Upper Manhattan Historic Preservation Fund helped the congregation restore what was left of the original windows and they now let in the natural light into the century old establishment. Check out their blog for more information and also a peak at what the building looked like beforehand: LINK. The Old Broadway Synagogue is located at 15 Old Broadway, which is a block east of Broadway and one block north of 125th Street. The nearest subway is the 1 train at 125th Street. Photo by Ulysses
Posted by Ulysses at 10:25 AM