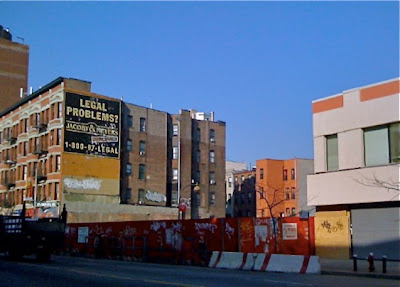 A reader and adept researcher got us the scoop on what's been planned for the that big lot on 5-15 West 125th Street, between Lenox and 5th Avenue. Apparently Reisman Property Interests was developing a 252 room luxury building called the Uptown Grand Hotel when the market was on a high note. Based on an old report sheet, the latest information would suggest that the current financial situation has stalled the site and a cheaper Hilton Garden Inn has been planned with more affordable rooms and a reduced number of 144 total units. All might seem like its clear and good to go but then there's a sketch of proposed office spaces from Curtis + Ginsberg Architects (second image) that has been floating around. This adds another layer of mystery to what is actually going to happen to the very large parcel of land that's been sitting empty for longer than we can remember (DOB records show whatever existed there was demolished in 2004). Check out the full site here: LINK. Top photo by Ulysses
Posted by Ulysses at 8:29 AM