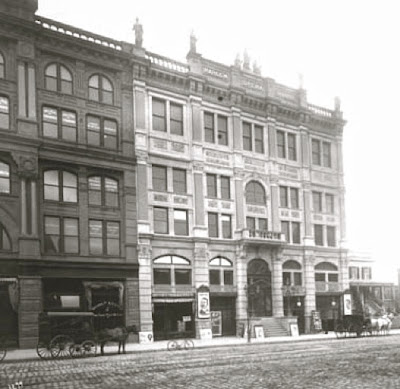 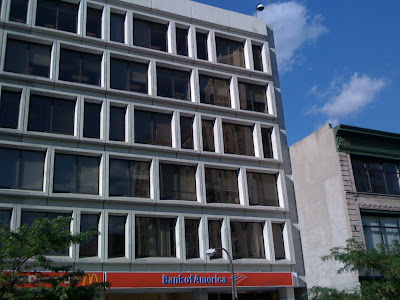 The above photo of the Harlem Opera House that was at 211 West 125th Street (between ACP/7th and FDB/8th) probably shows the building around 1889 when it was just finished. The pavement on 125th Street was still cobblestone at the time and notice the small country house to the right of the majestic structure (click image to enlarge). By the turn of the last century, a low corner building would replace the estate and that said construction would survive the Opera House itself. The lower photo shows the building that replaced the neoclassical structure in the 1960's (at left) and the structure which was built over the bucolic manor. See our past posts on the Harlem Opera House for more photos and background information: LINK.

Archival photo titled Hammerstein's Harlem Opera House at 8th Avenue and 125th Street, John C. Rice and May Irwin in "The Widow Jones" on billboards from the Joseph Byron Company collection at the Museum of the City of New York
Posted by Ulysses at 7:28 PM