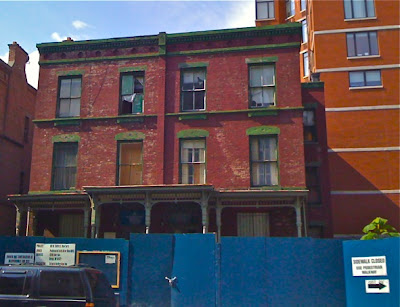 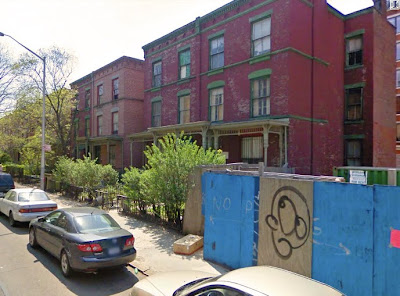 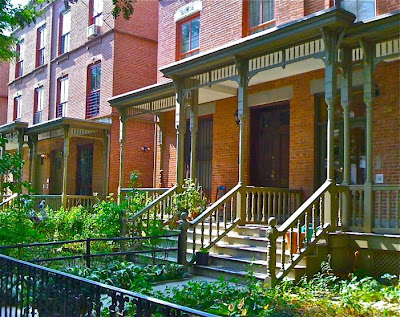 We noticed that the corner vacant lot of 400 Lenox Avenue (at 130th Street) just recently wrapped its blue plywood construction fence around to include number 60 and 62 West 130th on Astor Row (top photo). Previously, the fence just sectioned off the parcel of land on the corner of the avenue (middle photo) and these two buildings further down the landmark street seemed abandoned.
For those who are new to the area, Astor Row is the block of 130th Street, between 5th and Lenox, that was founded by in the 1880's by the Astor family. The late Brooke Astor returned in the 1990's and discovered the landmark country houses in various states of decay. Mrs. Astor worked with the local government and helped raised funds to restore most of the homes on the street her family founded (example at last photo).
Apparently, number 60 and 62 at the west end of the block did not decide to take the renovation offer up. Furthermore, these two buildings are included as part of the corner vacant parcel land on the Lenox end and lumped together as 400 Lenox Avenue. DOB records has this property marked as VACANT LAND but also verified as LANDMARK. There's also a couple of recent renovation permits for the buildings but nothing seems to have been placed into action as of yet. The land at the corner has been vacant since the 1970's and has been owned in recent years by a church based in New Rochelle. Anyone else have any leads on what's going on with these houses?
Posted by Ulysses at 11:24 AM