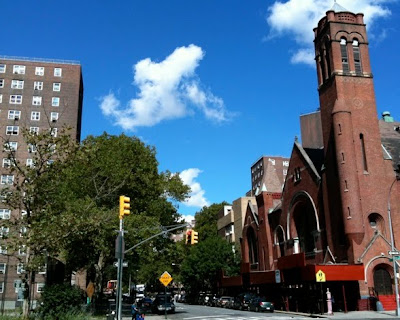 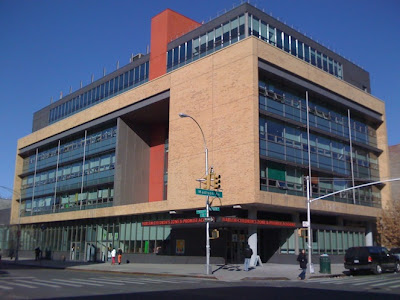 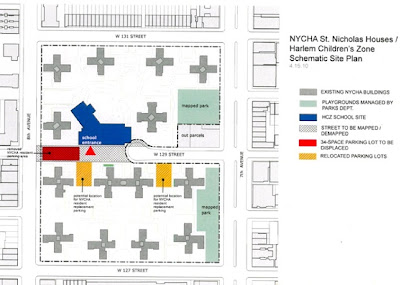 Last in our series of posts on repairing Urban Renewal superblocks is actually a story that has been featured this past May: LINK. Basically, the New York Housing Authority is leasing out the land that is located in the middle of the St. Nicholas Houses of Central Harlem and repairing an existing street that was previously discontinued (top photo is looking west from 7th Avenue and 129th). The 4 block deep public housing projects span between ACP/7th Avenue and FDB/8th Avenue, from 127th to 131st Street. At the center, there still remains a remnant of 129th Street which ends in a cul-de-sac (click on map to enlarge). The red area on the lower map shows the parking lot that is currently blocking off the westend of 129th at this section of FDB.
So the big news is that the new $100 million HCZ building (shown in blue) will take over some unused green space and the city plans to reconstruct the balance of 129th Street. In doing so, NYCHA has given away land for new development and also started the process in restoring this part of the city grid that was lost decades ago. It's a small move, but a major first step in figuring out how to retrofit the failed Towers in the Park model of city planning. Read the rest of the series on retrofittng the city's housing projects: LINK. The largest retrofit development recently happened just south of Harlem: LINK
Posted by Ulysses at 11:59 AM