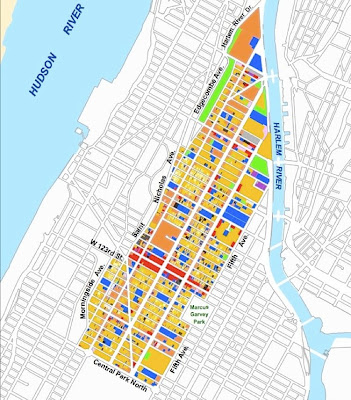 Central Harlem's Community Board 10 borders are easily defined at the east by 5th Avenue, at the south by 110th Street (Central Park North) and at the north end by the Harlem River (roughly 155th Street). On the west borders, the major promontory parks provide a jagged boundary to West Harlem. Morningside Avenue at the base of Morningside Park starts the most southern section, then St. Nicholas Avenue along St. Nicholas Park which eventually leads to Edgecombe Avenue adjacent to Jackie Robinson Park and finally to the Harlem River Drive at 155th Street. Historic blocks include Hamiltion Heights, Strivers Row and Astor Row. For more information on Central Harlem, go to the CB10 website: LINK. Click on map to enlarge.
Posted by Ulysses at 8:17 AM