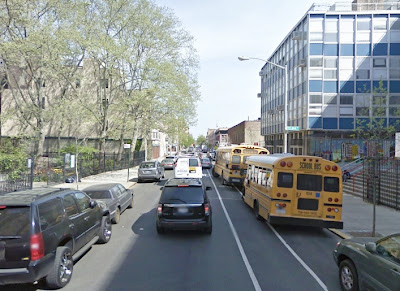 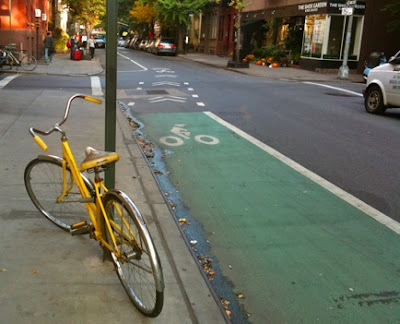 The issue of cyclist safety comes up again after a 27-year-old cyclist was doored by a parked car and flung into an oncoming truck this past Friday: LINK. One can see from the top photo that the block of 120th Street where the accident happened is pretty congested at times and even with the bike lane on hand, the 8:00 AM rush hour would have been precarious to maneuver.  The lower photo shows the green marked lanes that have been added to many of the side streets downtown which opens up the street at the cost of lost parking.  This has been a more controversial approach because of the parking issue but apparently East Harlem has one of the highest bicycle commute rates in the city so more attention might be needed in the matter: LINK. At the end of the day, there's a lot of talk about being more energy efficient and reducing carbon footprints but the city is still very automobile-centric as ever.
Posted by Ulysses at 9:23 AM