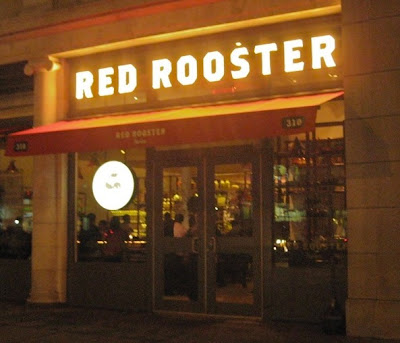 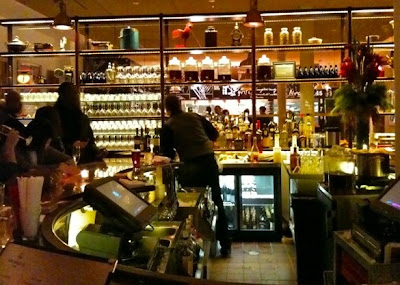 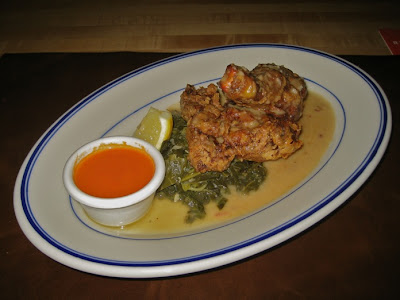 Harlem's most highly anticipated restaurant debut in decades finally happened last night at 310 Lenox Avenue.  Marcus Samuelsson's Red Rooster restaurant let patrons in well before the 5:30 opening and guests ordered draft beers, wine or cocktails at the curvilinear copper bar while waiting to be seated in the formal area in the back.  The past week's intense media coverage seemed to have gotten the word out since folks kept arriving in from the street at a time when most restaurants in the area are pretty empty.  Chef Samuelsson was on hand and made brief appearances to personally greet individuals within the crowd and oversaw the new staff from time to time.  So what was the overall dining experience like?

Ambiance wise, the interior was much warmer at night with just a soft glow of light that one would expect from a prestigious eatery downtown. We also noted that there were some bespoke details by the sharply dressed staff members who wore sartorial vest or jackets in combinations with bright accents colors (which is also a downtown-to-uptown first). The crew on hand, although charming, are pretty much in training for the next couple weeks so those who are on the impatient side should probably wait it out.

Last night's opening was a walk-in only affair so the seating was a little mysterious at times but those who were less formal got to experience the menu a little bit earlier than the rest.  The cafeteria-style tables with the bar stools up front served as a waiting area for folks who had their drinks but one could also order from the menu.  We were there for the food so quickly tested out the key cuisine of the night.

So the big test was the Fried Yard Bird which was the dark meat, double fried recipe that Chef Samelsson talked about at recent events. Served with a side of collard greens, lemon twist and a tin shake canister of special spices, the chicken was indeed quite outstanding when it comes to others uptown.  There's definitely more moistness to the meat in comparison to other eateries and the seasoning is on point. It's actually not too overly crisp and taste more like a secret homemade recipe than a contrived restaurant plate. The quick entree for $17 and a draft German beer for $6 had the entire meal finishing up around $28 when the tax and tip was included so it's not so bad if one is eating on the lighter side.  Did anyone check it out this weekend?
Posted by Ulysses at 11:39 AM