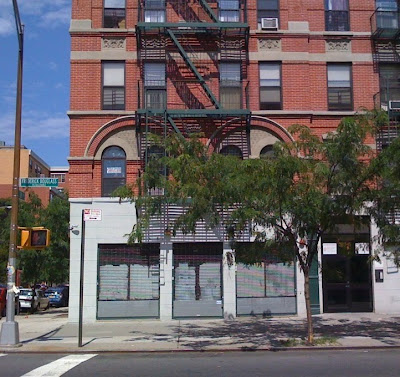 There was a lot of excitement about Magnolia bakery opening their distribution center in East Harlem last week but it turns out South Harlem's FDB/8th Avenue was also getting their own specialty cupcake store. When we saw the work permits up in July for 2211 FDB (corner of 119th Street), not much was evident except that some sort of eating establishment would arrive soon.  A tipster has now informed that The Cupcake Suite Cupcakery had been planning to set up shop by fall 2010 which they mentioned on their website: cupcakesuite.com. The question now is why didn't they open?  We took a look a current DOB records and it turns out a STOP WORK order was placed up in October for some sort of permit issue.  Anyways, that's another opening possibly for spring 2011 on the corridor.
Posted by Ulysses at 9:02 AM