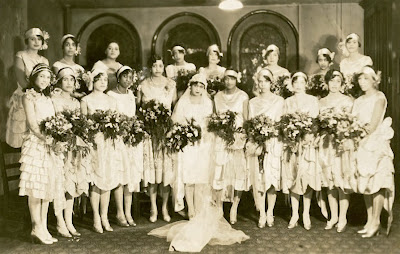 Harlem had a sort of Royal Wedding during the Renaissance years when famous poet Countee Cullen married the daughter of W.E.B. Du Bois in 1928 at the Salem Methodist Church.  Accounts have it that Yolande Du Bois had a total of sixteen bridesmaids but the above photo shows eighteen altogether. Countee Cullen's party was pretty substantial in itself with nine groomsmen altogether and also included fellow poet Langston Hughes. One account has it that 1,200 guests were invited but 3,000 people eventually showed up along with a huge public that waited out in front of the church to get a glimpse of the newly wed couple. Two years later, the ideal marriage of Harlem society would end in divorce because Cullen presumably spent a little too much time with his best man Harold Jackman. Photo via W.E.B Du Bois Library
Posted by Ulysses at 4:51 PM