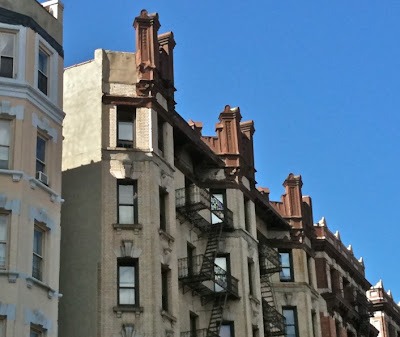 Another unique Harlem roofline detail can be found on top of a prewar residential building in Hamilton Heights.  Those who happen to look up while walking on 149th street by Convent Avenue might noticed that the press metal ornamentation that crowns one of the south side buildings almost appears to mimic chimney stacks or battlements of some sort.  Most of these architectural details were manufactured in mass quantities a century ago but this particular building might have had some custom made features since the cornice appears to be one of a kind.  Many of the older buildings have failed restore these architectural elements so it is refreshing to see that one such as this has been fairly preserved.
Posted by Ulysses at 10:43 AM