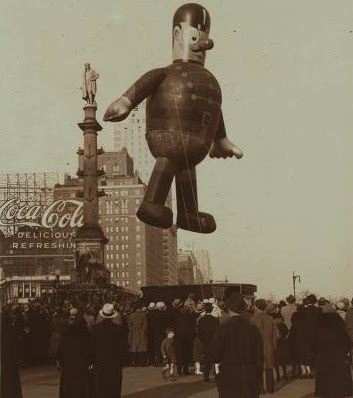 The above archival photo shows the Thanksgiving Day Parade circa 1932 around Columbus Circle but many might not have known that in those early years, the balloons actually started out Harlem. An article in the New York Post traces back to the first parade in 1924 and how the route started in Harlem before winding down Broadway until it reached Herald Square.  All of the original balloons were supplied by the Goodyear rubber company and were instantly a success with the crowds.  Read more about this annual New York event in the Post: LINK.  Does anyone know when the route was eventually diverted from Harlem?  Photo courtesy NYPL
Posted by Ulysses at 3:33 PM