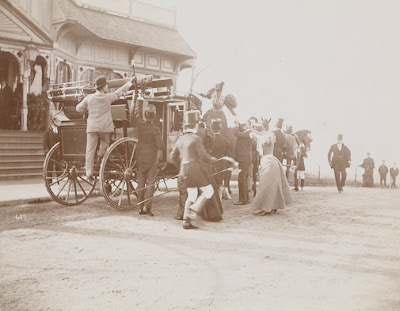 An older photo of the Claremont Inn at Riverside Drive shows the Havemeyer Coach arriving at the former landmark.  The countryside retreat faced the Hudson at West 124th Street and the inn was a popular destination for weekend getaways.  Men sporting bowlers and top hats can be seen assisting the guest and the women have the "leg of mutton" sleeves that were popular during the time period. The Claremont also was notable for its intricate open porch that wrapped around the building.

Byron Company, New York, NY, The Havemeyer Coach at Claremont, May 25, 1895 via the digital collection at the Museum of the City of New York
Posted by Ulysses at 5:11 PM