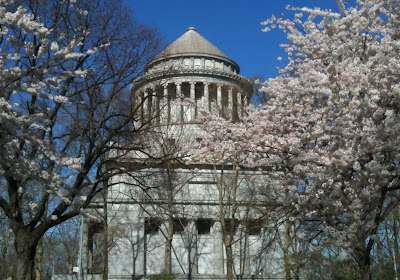 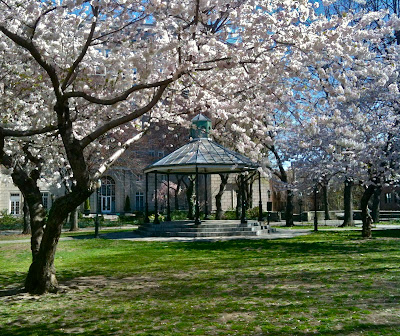 The warm weather in mid March has now caused all of the spring cherry blossoms to bloom 3 weeks earlier than usual. We usually start checking out the cherry trees at West Harlem's Sakura Park for early blooms this time of year but they have already peaked in the past week.  Sakura Park in West Harlem is Japanese in name and in history. In 1912, the Claremont Park was renamed Sakura Park after Japanese citizens banded together to donate cherry trees from Japan. A sculptural Toro was also donated to the park from the city of Tokyo in 1960, with Crown Prince Akihito presiding over the ceremony. Sakura is the Japanese word for cherry blossom and during the spring time, the Japanese celebrate by gatherings and picnics (hanami) under blossoming cherry groves. It is usually in early April in Japan, and the trees blossom later in New York City.

Sakura Park is much more humble than the Brooklyn Botanical garden but one will find about a half dozen cherry trees, a charming gazebo, as well as beautiful views of Riverside Church and Grant's Tomb. Photo were taken this past Friday so everything is definitely in full bloom at this intersection of West 122nd Street and Riverside Drive.
Posted by Ulysses at 10:15 AM