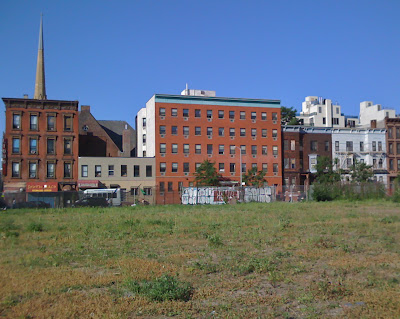 The Harlem Hyatt that was planned on the west corner lot at 125th and Lenox ran out of financing but the New York post now reports that a retail building with an established commercial anchor will be coming soon. A known retail developer has plans on a 5-story, 150,000-square-foot new construction at 100 West 125th Street and Burlington Coat Factory just signed a lease for the three top floors.  The article also brings up the rumored Harlem Whole Foods Market and that this development might just be the final location for the celebrated supermarket. A lease has been signed and a seasoned developer is attached to this project so this one might have a much better chance than some of the other failed developments along 125th.  If all goes according to plan, groundbreaking should start this fall: LINK
Posted by Ulysses at 9:20 AM