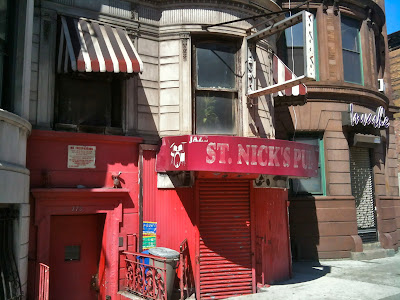 The venue known today as St. Nick's Pub originally started out as a jazz venue called Lucky's Rendezvous and was apparently very popular with Harlem's gay community in the 1940s.  Lucky's was opened by Lucky Roberts who had the distinction of being Duke Ellington's piano player.

This spot at 773 St. Nicholas Avenue and 148th Street had all the jazz greats stop by and perform but the boîte also had one notable publication of the time pointing out that "male couples are so commonplace . . . that no one looks twice at them." Rumor has it that Marlon Brando frequented Lucky's quite often after James Baldwin introduced him to the spot.  Lucky's Rendezvous would later become the Pink Angel in the 1950s and then finally St. Nick's by the 1960s.
Posted by Ulysses at 7:13 PM