☞ DRINK: Another Lounge for Manhattanville 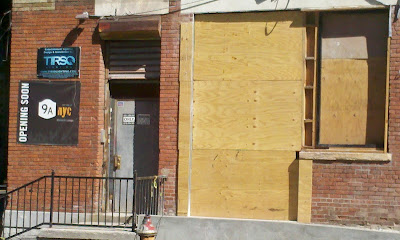 Bespoke readers have mentioned that signs announcing the arrival of a new lounge have popped up at an old storefront across from Fairway in Manhattanville's commercial corridor on 12th Avenue.  A former beer distribution company at 133rd Street will now be a new establishment called 9A NYC but that is all the information we have on hand now.  This industrial section of West Harlem has slowly transformed with a handful of restaurants and night spots opening in the past years but rapid development has been somewhat stalled by the construction of the new Columbia campus which has demolished many of the buildings.   With that said, any of the businesses that stick around when the university finishes up will probably reap the benefits of the new student population that will flood the area.
Posted by Ulysses at 10:29 AM