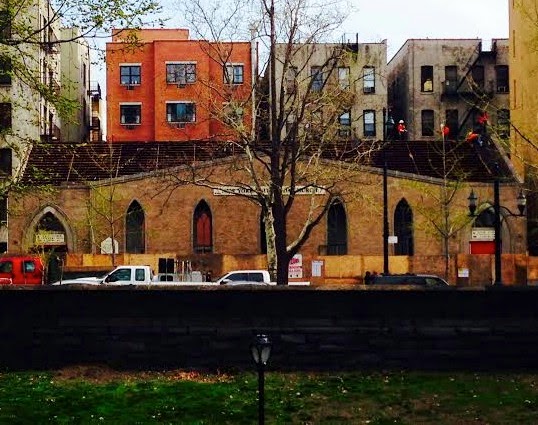 A couple of tips have come in that indicate that the Central Park North church located between ACP and Lenox Avenue will be the site of a new building.  The top photo was taken last week and shows a demolition crew on hand at the 110th Street location.  Another message received has the below details:

Former church at 145 Central Park North recently resold by 2013 purchaser for 16 million, reportedly at $4 million profit. To be developed by Einhorn Group into an 11 story 24 unit building – undecided whether condo or rental.

There are a lot of small churches in Harlem but many of them cannot replace a diminishing, small population of older parishioners and younger members are not joining these days.  Maintenance or repair of an old building can cost up to millions and thus some of the more diminutive congregations seem to be just cashing out as an alternative.
Posted by Ulysses at 9:01 AM