REMEMBER: A BALL IN HARLEM CIRCA 1950 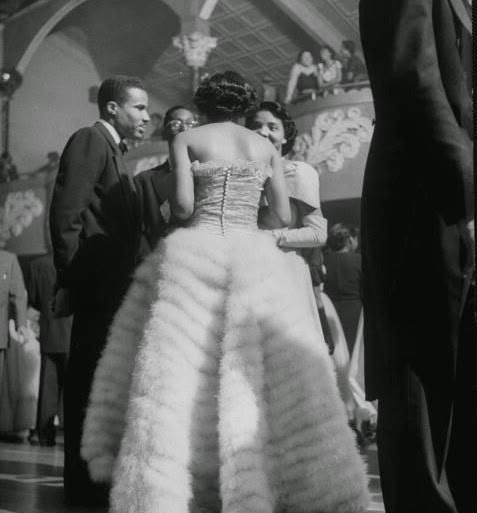 UPDATE: THIS EVENT IS ACTUALLY THE ROCKLAND PALACE ON 155TH STREET WHICH HAS ALREADY BEEN DEMOLISHED. Life magazine featured a story on a Harlem debutante ball in 1950 and the space in the background is surely would have been reminiscent to the ones at the Renaissance Ballroom and Casino.  More recently the New York Daily News wrote an article about the efforts to save the historic building which has help boost the signature count on a grassroots petition into the thousands over the holiday break.  Those interested in this local efforts to preserve one of the last architectural connections to the Harlem Renaissance should go to the petition provided in the link below:

A Change.org campaign has been started to save the Renaissance Ballroom at 138th Street and 7th Avenue from demolition.  As we mentioned in the past, the historic site which was one of the only significant social venues during the Harlem Renaissance that was actually built by African-Americans had been prevented from landmark status because the church that owned the building thought more developers would come along if limitations were not set to the site. One eventually materialized recently and now plans to demolish everything for a new residential construction has been revealed.

Over 2,050 signatures have been added on to the petition but thousands will probably be needed to get the message across.  Those interested can take a moment and quickly add their name to the roster along with reading more on the incredible history of the Renny: LINK
Posted by Ulysses at 9:08 AM