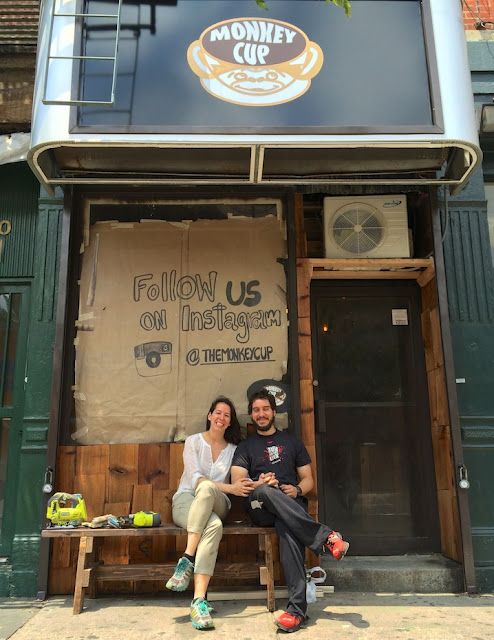 Monkey Cup on Amsterdam just north of 145th Street will be opening any day now and we were able to quickly talk to the owners out front while passing by the new storefront this afternoon.  Some have been curious on the name of the java joint and it turns out that the Harlem couple who are originally from Venezuela just love everything to do with the jungle since it reminds them of their home country.  One of the proprietors is affectionately called the monkey within the relationship and the tropical theme does not end there.

A forest can quite literally be found inside with most of surface covered in wood finishings except for the ceiling which has a verdant canopy from wall to wall.  Updated mid century hanging lamps bring it all together to a modern aesthetic and Monkey Cup promises to have some major coffee culture served within.   Beans from all over the world will be offered up and ground per order so that each cup is as fresh as possible in flavor.  Final inspections are at hand this week and an opening could happen any day now.
Posted by Ulysses at 4:04 PM