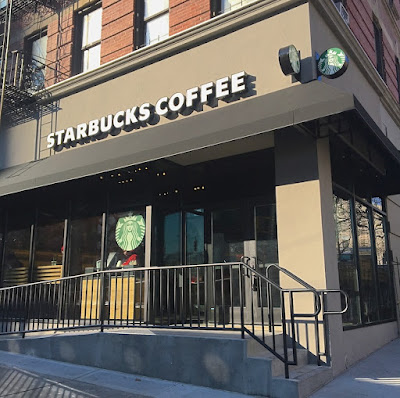 Over a decade ago, a Starbucks shut down over in Hamilton Height but now a new location just opened slightly further south by 125th Street and Broadway this past weekend.  The coffee chain did not go over well originally on the west side because the neighborhood still had a lot ethnic diners with very good and cheap offerings but now demographic shifts have once again attracted big business.  We stopped in a couple of times already and the Manhattanville location appears to have a  lot of foot traffic throughout the day from morning to evening.  Since Columbia University has been expanding in the area just a block north, many students have been moving into the neighborhood and it appears that this new addition will be a success this time around.
Posted by Ulysses at 9:41 AM