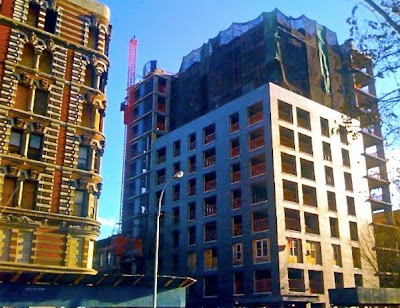 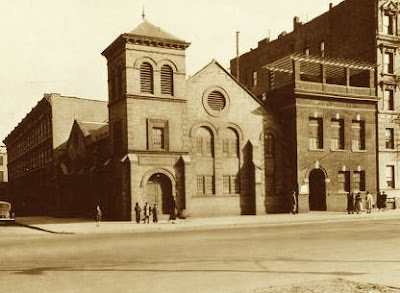 We were sad to hear that, early in the year, the Church of the Master decided to sell their historic, century-old house of worship (lower photo) to developers. The 115 year-old neighborhood institution was demolished this past January, and the new condo complex called 88 Morningside has arisen on the plot at the south corner of West 122nd Street. The brick has been coming up on the side of the building, so the completion might be within one year of the former church's demise. The new luxury condo's neighbor, 92 Morningside Avenue (which we mentioned previously), is a burnt-out, graffiti-covered, massive shell of a building. It would have been nice to have kept the charming church view and developed the apartment building shell instead. The challenge now is how the developers will conceal the messy view of its rather cumbersome next-door neighbor when they try to sell units next year. Read more about the history of the Church of the Master and see the last color photograph taken of it in our previous post: LINK. The closest subway to this new development is the A,B,C,D at 125th Street. For a preview of the final product, go to: www.88morningside.com. Top photo by Ulysses
Posted by Ulysses at 9:26 AM