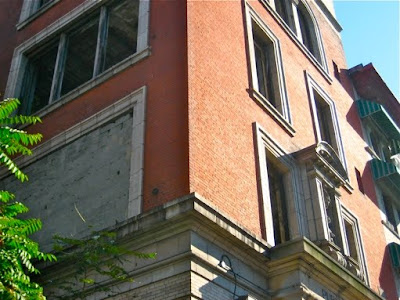 Last night, we had an insider take notes on the contentious Community Board 9 meeting that had the room in debate for an hour over the fate of the controversial school building P.S. 186. The historic building was sold to the M.L. Wilson Boys and Girls Club of Harlem 23 years ago with the stipulations that the building would be restored within three years and 85% of the space would be used for non-profit use. The club now wants to demolish the entire structure and build a high rise with only 25% of space used for the organization. In 2007, all parties agreed that constructing higher was possible if it involved housing that would address the immediate community and that the original building would be saved.
At this week's meeting, a spokesperson for the developer handled tough questions with parsed statements. When explaining what constituted "affordable housing," she delivered a rote response that used median income statistics for all of New York City, not specifically residents of Harlem (starting income caps for the affordable rental units would be $47K versus the neighborhood average income of $29K). She offered no real concrete explanation for why the original building could not be included in the new design, except that the architect deemed it not salvageable (a perspective that audience members questioned for bias). The example of P.S. 90 came up a couple of times since its developers were able to restore the school for roughly $40 million and found an architect that kept the original structure as a whole. Actually, five out of the six contending proposals for P.S. 186 incorporated the original school in its design, but the Club rejected them for the bigger project that would require rezoning the neighborhood.
Even among the many scenarios, preserving P.S. 186 had a lot of support in the room from old-timers and newcomers. Locals who remember attending the school and newer, younger residents voiced their concerns about demolishing the old building. There was a small portion of people who just wanted anything built, but the crowd in general was wary of the developer's and the Club's intentions. With heated debate already filling the room, one of the community members announced a pending proposal for landmarking the school building in the new year. The Landmarks Commission has calendared a meeting in the second week of January to review the subject with the board, thus adding another layer to the saga. One concerned community member complained that having a building landmarked would cause constant approval delays and that P.S. 186 could stay there forever. The crowd erupted in applause upon hearing this.
The next meeting will be on January 10th, 2010 at the Fortune Society, 630 Riverside Drive and 140th Street. Meetings usually start at 6:30 PM, and this will be the last public review before the board makes their final decision on voting for the approval of the project and the required rezoning. Community Board 9 covers Hamilton Heights, Manhattanville and Morningside Heights. Read more in our past post and see the project architect's past work: LINK. Photo by Ulysses
Posted by Ulysses at 9:48 AM