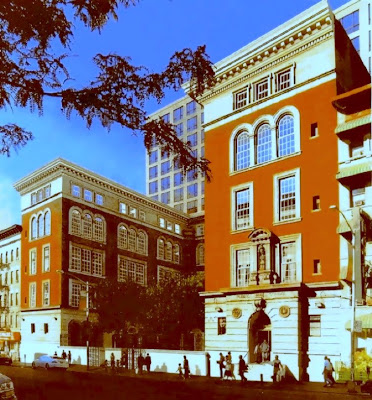 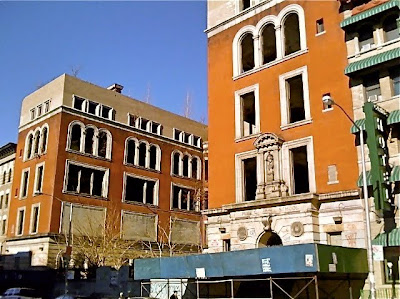 The red tape that has prevented the contractual obligation of the owners of P.S. 186 to restore the historic school building has once again stopped progress in the now 24 year effort to save the school. After the Landmarks and Historic Preservation Committee along with a full room of concerned citizens voted to seek landmark designation for P.S. 186 earlier in the past week, the Community Board 9 Executive Board reviewed the resolution last Thursday and voted it down by 1 member. Another resolution that the Arts and Culture Committee voted on was to start the procedure to remove ownership of the school from the Boys and Girls Club. The CB9 execs seemed only slightly more convinced on this one and voted to table the resolution by one vote.

The top image is that of a proposal from 2005 which was a financially feasible option to restore P.S. 186 and have condo units on top. Even though CB9 has stated that such a structure is most in line with the original government contract to develop the property, M.L. Wilson's Boys and Girls Club apparently went for the highest bidders who now want to tear down the entire building for a block heavy high rise. Next up will be Tuesday's zoning meeting (Jan 19, 6:30pm, 630 Riverside Drive @140 Street) in which the CB9 Land Use Committee will decide if West 145th Street will get the zoning needed to start any of the residential options proposed. Read more about the P.S. 186 in our past post: LINK. Lower photo by Ulysses.
Posted by Ulysses at 9:04 AM