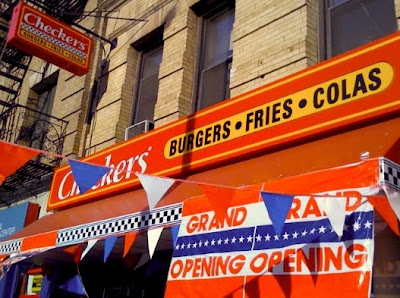 The first uptown location of Checkers has opened notably in Manhattanville this past weekend. The fast food burger joint took over a small retail space that never had much success but this new franchise seems to be working out as the location is constantly packed. We were fascinated with Checkers deco drive thru establishments on recent road trips and wondered what one would look like in the city. Unfortunately, the city space is actually lack luster and small compared to its free standing brethren but the french fries seem to be the draw here.

Food-wise, the arrival of Checkers is not such a big deal but what is of significance is that the sleepy retail corridor on far West 125th Street is starting to develop. Storefronts that used to be closed after dark now have businesses that provide a sense of neighborhood life at night. Also, since Columbia is taking over across from Broadway, this particular intersection will be important going forward for commercial development. This checkers is the second one to open in Manhattan and is located between Broadway and Old Broadway on West 125th Street. The closest train is the 1 train at 125th. Photo by Ulysses
Posted by Ulysses at 3:16 PM