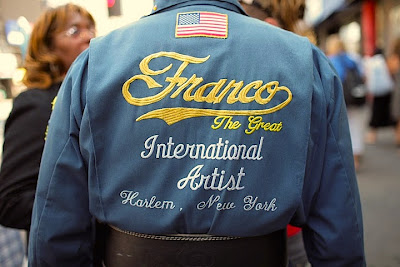 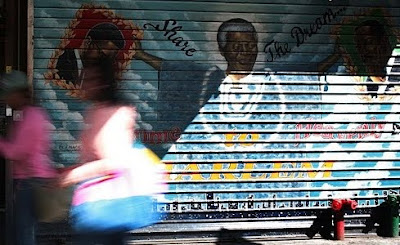 Friday, January 8th, starting 7:30 PM at the Maysles Cinema. Directory Sia Nyorkor and Jacop Templin's 2009 documentary called 125 Franco's Blvd highlights the works of mural artist Franco the Great, who basically is the most prolific public art painter in Harlem. Franco the Great's works can be seen on many of the store fronts around 125th Street and rezoning is now threatening to discard one of the last bastion of street art left in Harlem.
The 21 minute film will be followed by an All-Star Harlem stakeholder panel including Congressional candidate Vincent Morgan, real estate developer Beatrice Sibblies, Detective Dana Harper, writer Michael Henry Adams & Franco the Great. Check out the schedule at the theater's website: LINK. Admission $12.00 with limited seating. Come early. 343 Malcolm X Blvd/Lenox Avenue bet. 127th and 128th Streets. Tel. 212-582-6050. Nearest subway is the 2,3 train at 125th Street. Photos courtesy of Matthias Bernold
Posted by Ulysses at 8:47 AM