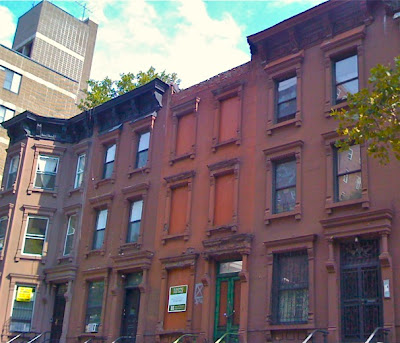 Since we have been looking at the shell market in Harlem this week, we decided to check back at 265 West 131st Street which will be going into its third year on the market. The story starts back at the end of 2005 when a buyer purchases the property for $650K (from the asking of $750K) and then proceeds to place it on the market soon after. Six months after the original purchase, the building exchanges hands for $950K in May of 2006 at the height of the market. After not much of anything going on the land for a couple of years, the property appears again in February 2008 for $1.1 million which, after sitting on the market over a year, was reduced to $489K in July 2009. By September of last year, the price went down to $449K and finally to $399K in December. The building is literally just the facade standing on an empty lot so a real experienced developer would have to have taken this project on to make this happen. Even with the grand scope that the renovations would entail, the Central Harlem location that sits in front of a major housing project might have been the one thing that steered future investors from the property. As of mid February, the house has been removed from the market. The nearest train to this location between FDB/8th Avenue and ACP/7th Avenue is the B,C at 135th Street. Check out the building that did sell on this block recently: LINK. Photo by Ullyses.
Posted by Ulysses at 2:54 PM