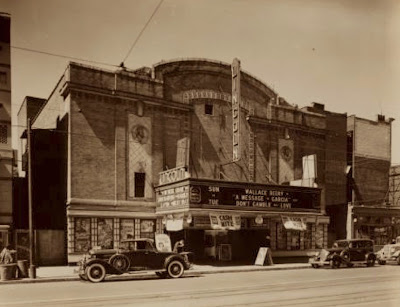 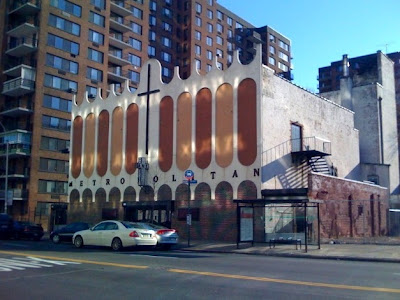 The first theater in Harlem to cater to an African-American audience was the Lincoln on 58 West 135th Street. Opened in 1915, the theater would be a pioneer establishment in a vastly white Harlem. In the early century and throughout the Harlem Renaissance, renowned entertainers such as Bessie Smith, Florence Mills and Fats Waller would perform at this major uptown venue. After the Jazz and Vaudeville years, the theater would go on to show films in the 1940's and 1950's. The top photo taken in 1936 shows the grand theater with its striking marquee. By the time the 1960's rolled around, the theater was sold to the Metropolitan Church and the facade was resurfaced into its current incarnation (lower photo). The interior of the building apparently still has all the original theater details including the seats. Seeing that the church went for a contemporary exterior, it's interesting that they saved the interior. The former Lincoln Theater is on the south east side of 135th Street, right off of Lenox. The closest subway to this location is the 2,3 train on 135th Street. Archival photo courtesy NYPL. Current photo by Ulysses
Posted by Ulysses at 4:48 PM