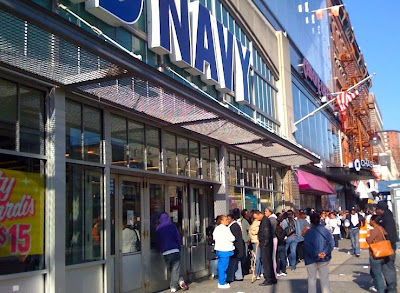 Walking by the Harlem USA Complex on 125th Street this past Saturday, we noticed the lines forming out front in anticipation of a big sale day opening. Old Navy was one of the first major chains to establish themselves in Harlem when new development started to happen and their seasonal sales have shoppers up very early in the morning and lining up to get a piece of the mark-down action. With all the issues the mall in East Harlem is having these days, we are surprised that Target did not try to establish themselves on central Harlem's main shopping thoroughfare instead of picking a location far away from public transportation. The foot traffic on 125th Street is definitely there and multiple subway lines make it easy for shoppers to arrive from any part of town.
Some planners want to make 125th Street the 42nd Street of uptown but being a little more low scale like downtown Union Square or 23rd Street might be more befitting for Harlem's charms. As far as wishful thinking on stores go, a Home Depot would really do well here. More better restaurants such as Mobay and Island Salads would also be nice to have around. So what do people think we need on 125th Street these days? Photo by Ulysses
Posted by Ulysses at 8:42 AM