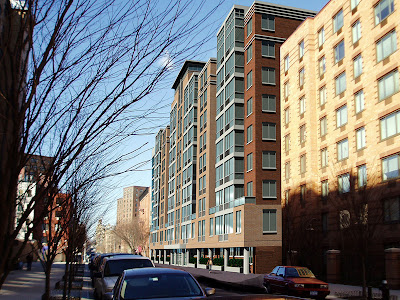 There's been a lot of noise over on East 102nd Street, between 1st and 2nd Avenue, since the new Hobbs Court and the Ciena started construction. The $143.5 million affordable-housing project will consist of two new eight story buildings with 259 units, called Hobbs Court (pictured) and the rehabilitation of five existing vacant walk-up buildings which will be called the Ciena. Hobbs Court will include amenities such as an open community space and below ground parking. The Ciena will have all the previous older buildings combined to form one complex, while creating 81 units overall. Other perks at the Ciena will include landscaped open space and the addition of elevators. The estimated time of completion for these rental buildings is 18 months. Read the interview with the developer in the New York Times: LINK
Posted by Ulysses at 8:35 AM