☞ SEE: The Dalai Lama At St. John the Divine 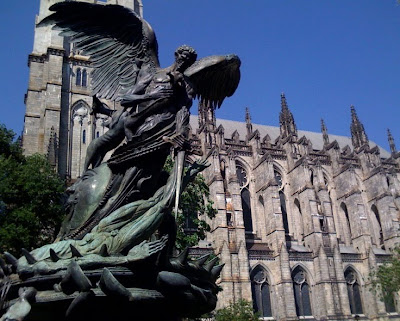 Many might have noticed the traditionally garbed, Asian tourist on the trains this weekend and we originally thought it had something to do with Asian Heritage Month (this May). As it turns out, this past Sunday, the Dalai Lama spoke to a sold out audience at Morningside Height's St. John the Divine. The event had the likes of Richard Gere and Naomi Watts visiting the uptown nabe in support of the 14th Dalai Lama of Tibet. This follows an appearance on Friday at Radio City Music Hall of which photos can be seen at the Dalai Lama website: LINK. For more details of the New York visit and photos at St. John the Divine, check out the Associated Press article: LINK
Posted by Ulysses at 8:32 AM