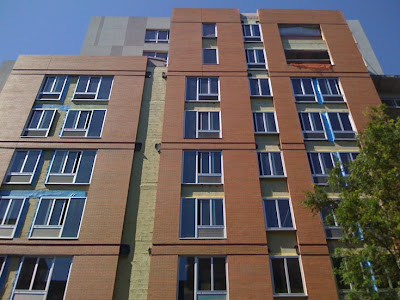 When we had the story up on the near completion of the new rental construction at 620 West 143rd Street, the website and other information was not available. After getting a reader's tip and couple of request for contact information, it was revealed that the West Harlem building located by the corner of Riverside Drive will be called The Alberta. From the looks of the interior images, this one is definitely going for modern (is that Mapplethorpe on the wall?). Occupancy is apparently in October 2010: AlbertaNYC.com. Facade photo by Ulysses
Posted by Ulysses at 9:53 AM