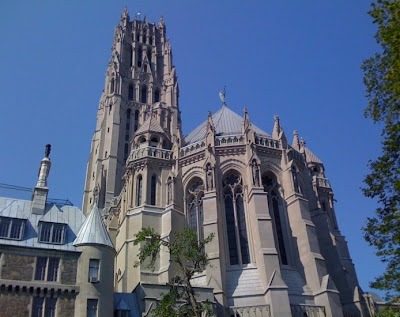 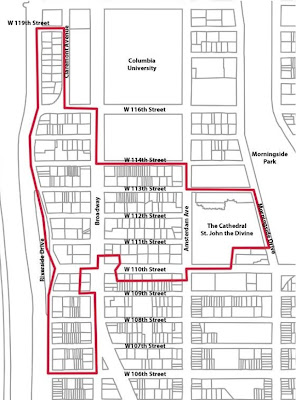 Monday, September 20th, 6:00 PM at Riverside Church, Room 10-T (entrance located at 91 Claremont Avenue). Assembly Member Daniel O'donnell's office has been sending out notices about the big meeting with the Landmarks Preservation Commission this coming Monday on the proposed Morningside Heights Historic District. LPC has recently extended historic neighborhoods in Brooklyn, the West Village and the Upper West Side so it's about time they focus more on the neighborhoods above 110th Street.
Monday's meeting will have LPC provide information to homeowners and is one of several initial steps on possibly getting the district set up based on feedback. These meetings will also influence the size of the district which could include more than the above map if there is enough interest (double click map to enlarge). The formal request for the designation started back in 1996 and it looks like things might be happening sooner than later. Read more in last year's New York Times: LINK . This one is also important for Central Harlem since the extended Mount Morris Park Historic District has been on the table for years and LPC seems to be making their rounds this year.
Posted by Ulysses at 8:53 AM