☞ READ: Catching up with the Douglass 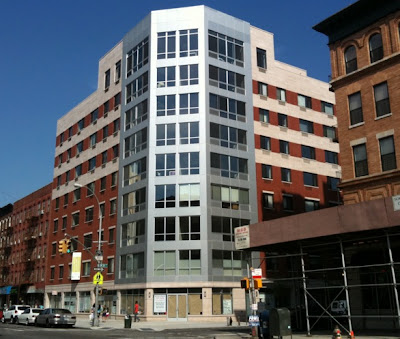 When it was announced that the Douglass condos at 2110 FDB/8th Avenue was receiving its Temporary Certificate of Occupancy for being 75% sold this past July, there seemed to have been some voiced concerns that those contracts would not close: LINK.  Streeteasy did list most of the units in contract at the time and there were no official closings found so we decided to check up on where everything stood today.  According to current Streeteasy stats, 17 units are now sold, 1 unit is currently in contract and 6 are available for sale. The unit count was first reported at 38 so we are assuming the balance of unaccounted  apartments consist of those that are selected by lottery.  There's no real price per square foot revealed except the last asking which averaged around the $600 range: LINK.  Walking by the new construction, one can see that various window treatments are up and furniture in place so people are definitely living there.
Posted by Ulysses at 12:42 PM