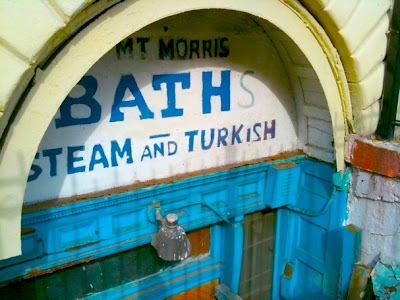 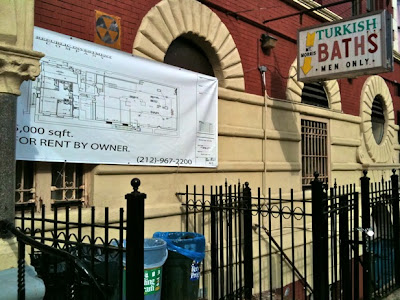 The Mount Morris Turkish Baths at the south corner of Madison and 125th Street is finally up for lease. A sign that hangs on the building states "men only" and one can see an arched entrance at the sub-level of the cellar commercial space which was a sauna opened by doctors in the area during the early 1890's.  An article in the New York Times from 2003 reports that the baths became a gay establishment in the 1930's but had in recent years became just "a meeting place" for men before it shut down permanently: LINK.

The owner, who's wife has had the establishment in the family since the early 1900's, lives upstate and is apparently trying to lease out the 5,000 square foot iconic gay Harlem institution (click lower photo to enlarge).  In our opinion, this would really be a great place for an actual gay bar or speakeasy in this part of town since they all disappeared a long time ago. It just needs some updating and someone to paint that "S" properly under the aforementioned arched entrance.
Posted by Ulysses at 12:25 PM