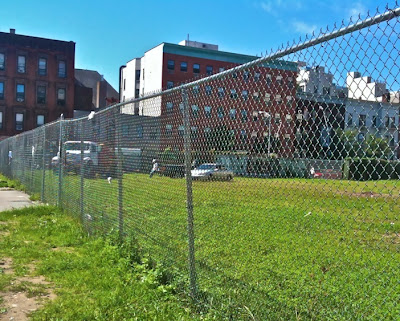 There seems to be some hope for the proposed Harlem Hyatt at the corner of Lenox and 125th Street as reported by the Uptowner (a Columbia grad paper): LINK.  When we were photographing the drilling at the open lot yesterday, Emmitt Smith's development group received full approval of the project from the New York City Capital Resource Corporation. As previously reported, "groundbreaking" has to happen by December 31st but this apparently is a ceremonial event since a New York City Economic Development Corporation official stated at the meeting that the actual construction will not begin until early 2011. Mr. Smith's organization proved to the board that gains were made by reaching an agreement with the New York Hotel and Motel Trades Council and that the final negotiations with MWB General Construction was at hand.

Another project in Brooklyn had been approved for the $15 million in tax exempt bonds by the EDC (just in case the Hyatt deal falls through) but today's Wall Street Journal reports that there's enough money to go around for the December 31 deadline. New York City was allocated $121 million in Recovery Zone Bonds that had to be used by the end of the year or the money will go back to the federal government. The Harlem Hyatt was scheduled to receive the last of the tax-exempt bonds and many thought that when the Brooklyn project received the approval that there would not be any funds left.  Today's WSJ article reveals that another development deal has since collapsed and this will allow the Harlem Hyatt to move forward if all the paperwork is completed on time: LINK. Top photo is of the August drilling on the proposed site.
Posted by Ulysses at 8:39 AM