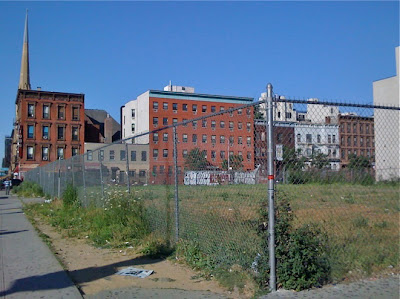 Today's Wall Street Journal reports that the Harlem Hyatt project will officially miss the deadline to receive $20 million in tax-exempt federal financing but the developers still plan to move forward.  As most following the story know by now, Hall of Fame football star Emmitt Smith's company ESmith Legacy Inc. had previously been granted the bonds that would have moved along the $81 million hotel project at 125th Street and Lenox but only if the official ground breaking makes the December 31, 2010 deadline.   Since the federal money could  be used by another New York City project, the developers announced last night that they decided to withdraw the fund request. Even though this is a major blow to the Harlem Hyatt development, Brian Morris, one of the firms co-founder has stated that all other financing to get the project started will be in place by the end of the first quarter of 2011.  Read more details on the article at the Wall Street Journal site: LINK
Posted by Ulysses at 8:32 AM