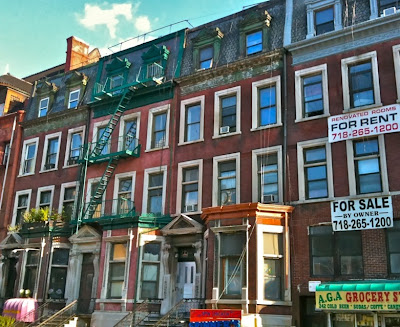 Another one of the landmark brownstones facing Lenox Avenue that need a bit of work has finally sold.  Number 246 Lenox Avenue (at center  with the fire escape), which is just north of 122nd Street, was part of a row of pretty rundown buildings that had sales signs up for the past couple of years.  Back in 2008, the 22 foot wide townhouse with, 5,368 square foot of space was trying hard for $2.5 million when it first entered the market but has since been reduced several times until the listing was removed over a year ago at a $1.6 million asking price.  We hadn't seen any other advertisements this year for the SRO with a reported certificate of non-harassment in place but it apparently sold for $1.15 million a couple of weeks back according to public records.
Posted by Ulysses at 2:59 PM