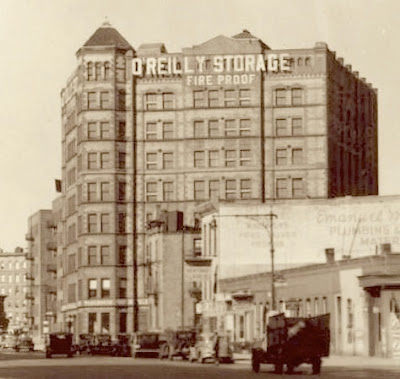 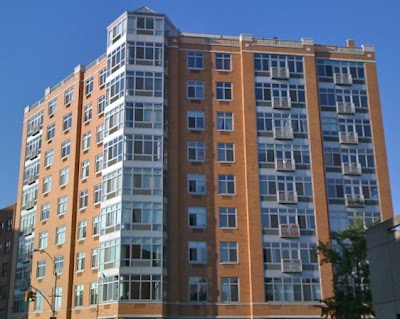 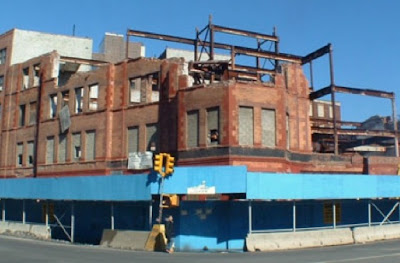 The rebirth of the Dwyer Warehouse over five years ago on St. Nicholas Avenue and 123rd Street might be an example on how to restore a lost landmark when much of it had already been destroyed.  At top is an old photo of the warehouse which orignally had the Irish name of O'Reilly but would change ownership and become the Dwyer Warehouse. Efforts to restore the building several years ago ended badly with a fatal accident that took the life of one of the workers on the site and the entire structured was deemed unstable and mostly demolished. The lower photo (via Starts and Fits) shows the building back in 2005 when not much of the base was left.  Today, a mixed-use residential structure sits on on the site of the old landmark and the architects have made a modern translation with a nod towards the designs of the past (middle photo).

As the city receives proposals for the Corn Exchange Building on the April 22nd deadline, this line of thinking might be something that the Landmarks Commission should really consider if a modern direction gets chosen. The Walls Street Journal posted an article this weekend that highlights various thoughts from folks in the community which range from a public pool to rebuilding the East 125th Street landmark into a historic hotel: LINK.  Ideally, the East Harlem building over by Park Avenue will be restored to its original state but only time will tell if that will ever happen. Archival photo courtesy NYPL
Posted by Ulysses at 5:06 PM