☞ READ: Settepani in the News 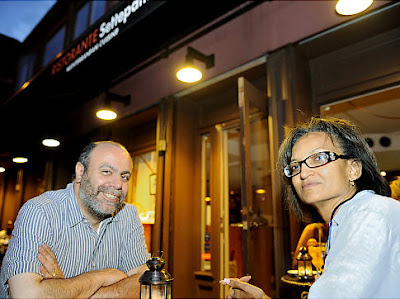 An article in the Daily News explains how small businesses have struggled to survive through the past recession and Settepani was featured as one that made it through.  The eatery at 120th Street and Lenox originally was just a cafe with baked goods but the recession in 2007 made that business model almost obsolete and owner Leah Abraham almost closed shop.  After receiving a $150,000 small business loan that helped transform Settepani over into a full service Italian restaurant,  Ms. Abraham and husband Nino Settepani have now beat the odds.  Business has been doing well enough that the couple applied for a second loan to open the more casual brick oven branch of Settepani on 119th Street which should be open sometimes later this year: LINK.  Read more in the NY Daily News: LINK.  Photo by Aaron Showalter via the Daily News.
Posted by Ulysses at 8:55 AM