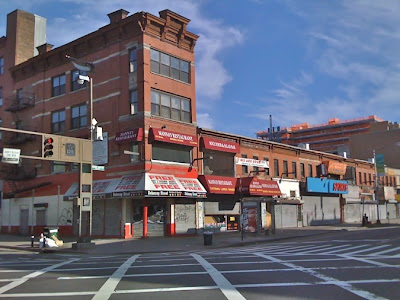 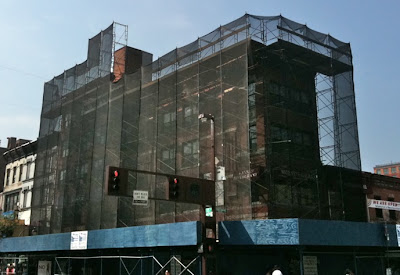 Blue plywood surrounded the buildings owned by Kimco on 125th and FDB last month along with a posted demolition permit but the said site has been inactive until now.  The lower photo shows the  scaffolding and netting that has just gone up on the tallest corner building so it appears the end is near for the century-old storefront.  As discussed previously, folks should expect a new, possibly glassy, 3-story structure to span the multiple lots at this corner of Central Harlem.  Big-box retailers have reportedly shown interest and that is why the project is progressing after being stalled for the past couple of years. From the description of 60,000-square-foot new commercial building, one might expect something similar in aesthetic and scale as the Harlem USA building which is just across the street on the south side of the boulevard. More on this development in our past post: LINK
Posted by Ulysses at 12:05 PM