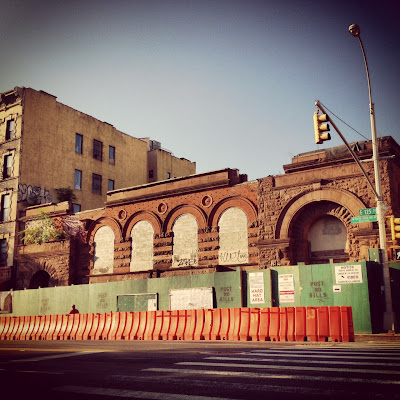 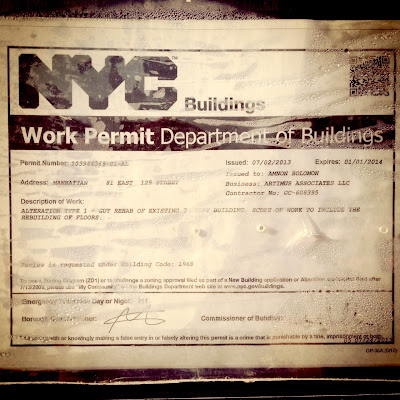 New plywood has gone up along with a wall of fresh permits at East Harlem's landmark Corn Exchange Building site and construction should begin this month.  A poster of the final design has been placed out on the construction site located on 125th Street by Park Avenue and everything appears ready to go based on the paperwork.  The most informative DOB document on display was approved just 5 days ago and has the approval confirmed for a gut rehab of the existing 7 story building which includes the building of floors.  This former bank is probably East 125th's grandest structure but was partially demolished since the previous owner failed to maintain the building and develop it based on government timelines.  According to the previously mentioned document, the building could possibly be completed within 6 months since the permit expires on January 1, 2014.

Since the Corn Exchange Building is an official New York Landmark, the architectural gem will be reconstructed to its original glory thanks to the architects of Danois who have done this sort of restoration in the past.  Check out our previous post to see what the final building plan will look like: LINK
Posted by Ulysses at 9:01 AM