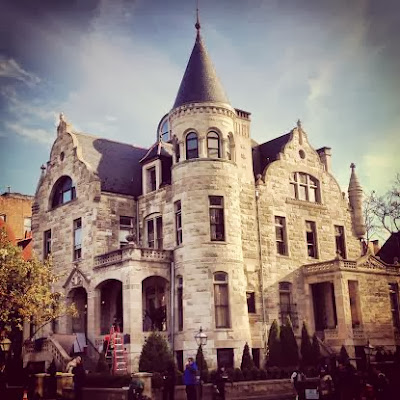 The filming of The Knick continues up on Sugar Hill this week.  We walked by the newly restored Bailey Mansion at 150th and St. Nicholas this morning and saw that the film crew have all set up on site. It took 3 years to renovate inside and out but the former home of the Barnum & Bailey circus founder will now be camera ready for the early century period drama that features Harlem's Knickerbocker Hospital.  The Bailey mansion sold way below asking price at $1.4 million back in 2009 and we gather it should have increased in value by at least a couple of million since the restoration has been completed: LINK
Posted by Ulysses at 10:27 AM