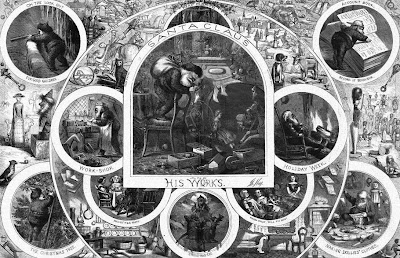 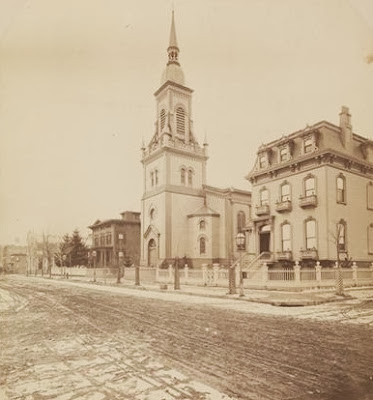 The modern version of Santa Claus was invented by political cartoonist Thomas Nast who lived with his family in Harlem for many years in the mid 19th Century.  This jolly version of the Saint Nicholas mythos was made famous by Nast in Harper's Weekly December 25, 1866 addition which would indicate that the American version of Santa evolved from the art studio of the Harlem artist's home.    Some sites say that Mr. Nast lived in the Mount Morris Park neighborhood and others mention 125th Street by Fifth Avenue but an address has not been circulated until now.

We found one record that provide the exact address of the Nast estate as Number 24 West 125th Street which would be the north side of Mount Morris Park just west of Fifth Avenue.  Today a tenement building sits on this site but from 1864 until 1872, Mr. Nast's Harlem would have looked like the above photo which shows Fifth and 127th Street circa 1870.  All of the houses would have mostly been free standing with yards and would pretty much look like some of the small historic upstate towns like Hudson New York.  Thomas Nast would eventually relocate to New Jersey after a series of political cartoons stirred up criticism about the corrupt New York City government and thus procured threats to the young family in Harlem.  The property would probably have been sold to developers a decade or so  later during a time when brownstones and tenements would take over the new landscape of 125th Street.

Archival photo courtesy the Museum of the City of New York
Posted by Ulysses at 10:43 AM