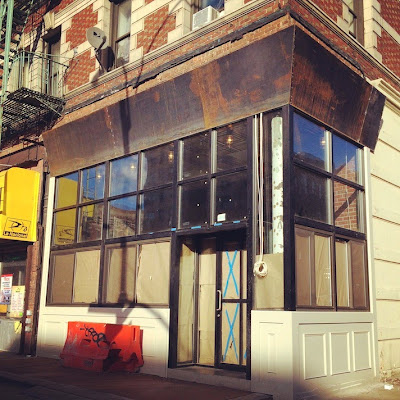 So the rumors are all coming to an end on what the space will be at the at Broadway by 142nd Street and the most random one seems to be winner.  First we heard that a Starbucks was arriving to the corner by what we thought were reliable sources but that no longer seems to be the case. Then the second tip was that Anchor wine bar would debut a pizza spot at the said address but that establishment opened up across the street.  Then the last bit of information received on the blog was that a gay bar would arrive, but how could this be?

There has not been a new gay lounge in Harlem since probably the 80s and all of them have shuttered since then.  The closest official gay bar uptown is Suite on 109th Street which is actually on the outskirts of West Harlem's south border.  Based on the Instagram account for @loft_142, the interior space looks like it is almost completed based on a new post from 2 days ago but the bio just states that the business is a bar/kitchen arrving at 3480 Broadway.  One other clue is that the owner tags @castroBarNYC in the aforementioned photo which is apparently the main gay bar in Inwood, so there appears to be a relationship here.  Maybe Loft 142 might not be full on gay establishment but it will probably be one that has a large LGBT clientele based from what can be seen thus far.
Posted by Ulysses at 3:24 PM